Find out what the City is doing to respond to the Coronavirus (COVID-19) and what you can do. 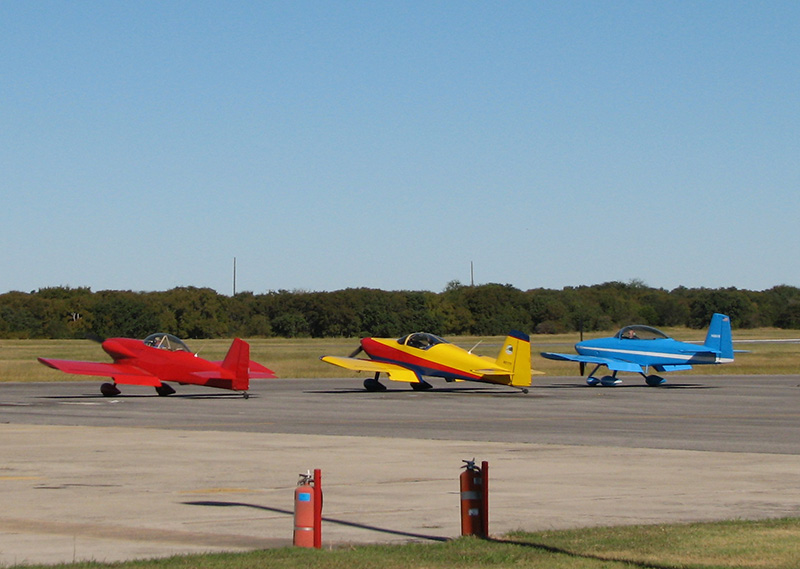 The Georgetown Municipal Airport was established with a grant from the Civil Aeronautics Board, forerunner of the Federal Aviation Administration (FAA) in 1941. Construction started in early 1945. Our Airport plays a vital role as a general aviation reliever airport for the region. Originally the U.S. Government wanted to establish a training site for military aviators for the upcoming war, but by the time the airport was built, the need for training military pilots was lessened. Today, Airport businesses account for approximately 200 jobs in the local economy including several critical aviation sectors such as flight instruction, airplane and engine repair, avionics repair and modification, airplane and helicopter sales, and vintage airplane restoration. Airport operations include search and rescue, medical flights, army aviator training, recreational flying, and corporate light business jet traffic. Civic contributions include Angel Flight, school class tours, high school aviation classes, Civil Air Patrol, Experimental Aircraft Association, and charity car and airplane shows.

This list of frequently asked questions is provided to share information related to airport topics with the citizens of Georgetown. The questions and responses cover topics ranging from planned Airport improvements, project environmental reviews, future plans for the Airport, Airport operational requirements, and the economic impact and financial health of the Airport.

Why are the underground fuel tanks being removed and replaced with above ground tanks?

The previous fuel storage facility included Avgas and Jet A underground storage tanks, which were approximately 25 to 30 years old. Underground tanks are systematically being removed at airports all over the country. Since the Georgetown Municipal Airport is located over the Edwards Aquifer recharge zone, removing underground storage tanks is an additional environmental benefit. The new above-ground fuel tanks include a 15,000 gallon tank for Avgas and a 20,000 gallon tank for Jet A fuels and are in accordance with design guidelines for operations at the Airport. The new tank sizes allow the City to benefit from the purchase of bulk fuel without paying multiple delivery fees for smaller loads. Less drive time is also an environmental benefit. While the previous underground tanks met the rules and standards of the Texas Commission on Environmental Quality, they were near the end of their expected life cycle. As with all underground fuel tanks, tank leakage was constantly monitored for indications of potential ground water contamination. The Airport has never been fined for any fuel spills or tank leakage.

Are other repairs or improvements planned?
New lighting systems and improvements to taxiways and runways are underway. This year, taxiways will be repaired with crack seal and seal coating and the concrete apron near the Terminal will be patched. Rehabilitation of the main runway with a new asphalt overlay is planned for 2020. The most recent runway rehabilitation was 28 years ago.
Do all Airport Improvement Projects require completion of an Environmental Impact Statement (EIS)?
Not for all projects. Per guidelines from the Federal Aviation Administration, Environmental Impact Statements are only required for certain categories of airport improvement projects. Projects subject to an EIS include airport location, runway location, or major
runway extension. Additional information may be located in FAA Order 1050.1F.
Has the Georgetown Municipal Airport complied with EPA rules and regulations regarding environmental review and public notice?
In a September 16, 2015, Hotline Response letter, the FAA confirmed all maintenance and development activities involving Federal and State supported grant funding have been completed according to regulatory requirements. Please read the attached communication addressing the issue: FAA Response to Hotline Complaint.
Can the Georgetown Municipal Airport be closed or relocated?

Under agreements between the City of Georgetown and both state and federal agencies, the City of Georgetown agreed to operate an
airport at the current site of the Georgetown Municipal Airport. These agreements date from the founding of the Airport in 1945.
Like Interstate 35, the Airport is part of the national transportation infrastructure funded with federal money for the purpose of general public use. Relocating the Airport from its current location would require approval from the Federal Aviation Administration and the State of Texas. Stipulations for relocating could involve reimbursements of more than $17 million in grant funds provided for Airport improvements, buying out existing tenant leases, and bearing the total cost of a new airport. Such costs would include infrastructure for water, sewer, electrical service, and public roadways at a new location. Most recent relocation cost estimate is $320 million.

Are there any plans to add commercial passenger service or large airplane cargo operators such as FedEx or UPS to the airport?
No, Georgetown Municipal Airport is a general aviation reliever airport. Adding passenger service or large cargo operators to the airport is not planned at either the City or State level.
Does the city have any plans to extend the runway length at Georgetown Municipal Airport?
There are no plans at either the City or State level for any runway extension projects. A 1996 City Council Resolution 960123-JJ reaffirmed this.
Why has the land been purchased at the ends of Runway 11/29?
At the end of each runway is a runway protection zone otherwise referred to as a “clear zone,” which is an area that must be free of obstructions. The clear zone is established to improve visibility for airplanes taking off and landing. Clear zones also provide protection for anything on the ground during take-off and landing. Recent land purchases were mandated by guidelines published in FAA Advisory Circular 150/5300-13 – Airport Design requiring airport sponsors (City of Georgetown) must
own the land in the clear zones.
Are there any plans to purchase, through fee or easement, any homes within the vicinity of the Airport?
There are no plans at either the City or State level to purchase homes or other residential property near the Airport.
Why is the Georgetown Airport Master Plan being updated?
While most airport master plans typically cover a 20-year span, the current 2005 Airport Master Plan is currently being updated with publication of an updated plan estimated to be complete summer 2018. Public participation in the update process will be key to adopt an effective Master Plan. The update of the Airport Master Plan helps provide guidance and direction for future planning of Airport improvements to meet the desired goals of the community.
Are public use airports allowed to limit airport hours of operations, the number of takeoffs or landings, or the number of based airplanes at their airports?
No. These type of restrictions would violate the FAA grant assurance provisions on the use of and access to public airports that are part of the National Airport System. FAA grant assurances are obligations to which an airport owner must agree in order to accept federal grant funds. Airplanes using an airport can be limited based on the airplane operational requirements such as runway length and elevation of airport. Each airplane operator is responsible to ensure they can safely operate at an airport.
How has the opening of the Control Tower affected flight patterns and traffic at Georgetown Municipal Airport?
Since opening of the Control Tower in 2007, air traffic controllers now manage the flow of airplane traffic both in and out of the Georgetown Municipal Airport. This has resulted in safety improvements of flight operations over the previous uncontrolled operations at the airport. Air traffic control follows strict safety criteria and guidelines. Controllers in the tower manage air traffic in a five-mile radius of the Airport. The Control Tower
is open 7 days per week from 7 a.m. to 10 p.m. Due to sporadic night time airport use, from 10 p.m. to 7 a.m. the airport reverts to an uncontrolled air space.
What programs are in place related to Airport noise issues?
A 2002 Airport Noise Compatibility Study provided recommendations related to Airport flight patterns and ground maintenance operations. The study examined the voluntary Fly Friendly program with recommendations for pilots utilizing the Airport. With the 2007 activation of the Control
Tower, traffic patterns now follow airport traffic control guidelines. Airport management has identified two locations for ground maintenance high-power engine testing. These locations were selected to minimize noise issues from engine run operations.
What economic benefit does the Airport provide to the City of Georgetown?
The Georgetown Municipal Airport generates economic activity through capital and operations expenditures, business activities of Airport tenants, and spending by visitors using Airport facilities. The Airport provides an economic benefit to the local economy through employment of over 200 personnel at various businesses on the Airport. A 2011 Texas Department of Transportation Economic Impact Report concluded the airport has an Annual economic impact to the City of Georgetown local economy of more than $23 million dollars. Please read the attached report Economic Impact Report.
What is the financial health of the Airport?
The financial health of the Airport is in great shape. The Airport currently covers100 percent of all expenses including matching shares for TxDOT grants, airport staffing, operations and maintenance. Fees paid by Airport users through such items as leases and fuel sales pay 100% of all airport
expenses. The Airport is completely self-sufficient.